In 1986, a group of committed parents and Montessori educators opened Brickton Montessori School as an educational alternative that presents learning as a joyful, exciting process. The school of two staff members and four children opened that summer in the basement of a local church and by August moved into a portion of a local public elementary school. Brickton expanded to five classrooms in its new location and began offering programs to children ages two through twelve years.

By the spring of 1989, Brickton had outgrown its space at the public school and moved to its present location in Chicago. Following the move, the school continued to grow and opened a middle school to extend programming through the eighth grade, and, most recently in 2018, opened a Nido (Infant) classroom to serve our youngest learners 3 – 24 months. It now serves approximately 140 students from Northwest Chicago and the surrounding suburbs. 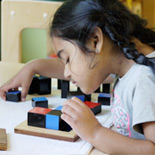